At Flemington racecourse in Melbourne, Coolmore's former Gr1-winning Champion Australian Sire Fastnet Rock (Danehill-Piccadilly Circus, by Royal Academy) added a Group success when 3YO bay filly Catchy (Fastnet Rock-Cats Whisker, by Fusaichi Pegasus) utilised her trademark late finishing burst to score a strong win in the $200,000 Gr2 Danehill Stakes (1200m) for 3YOs, defeating Jukebox & Booker. Racing in the red and white checked silks of Robert Crabtree's Dorrington Farm, Catchy advanced her record to 5 wins (including the Gr1 Blue Diamond Stakes & Gr2 Blue Diamond Prelude) from 7 starts for $1,251,000 in earnings. Co-trainer David Hayes said Catchy was likely to bypass the Gr1 Thousand Guineas against her own sex in favour of the Gr1 Caulfield Guineas against the boys. "In that Blue Diamond, if you go back and watch how powerful she was that last 400m, and she did that to the boys again today" Hayes told racing.com. "So at the moment, she's favourite to take the boys in the $2 million Guineas." The Gr1 Caulfield Guineas (1600m) will be run at Caulfield racecourse on 14 October. By Fastnet Rock out of the dual Gr2 winner Cats Whisker (Fusaichi Pegasus), Catchy was purchased by Dorrington Farm for $220,000 at 2016's Inglis Australian Easter Yearling Sale from the draft of Coolmore Stud. 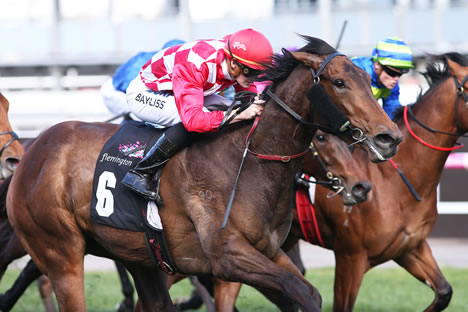 Catchy is favoured to take on the colts (pic: Mark Gatt)