After an outstanding autumn which resulted in three consecutive city wins, trainer Brad Graham is planning an ambitious spring campaign with promising Western Australian galloper Tonkatuff. After a short break, Tonkatuff is now back in work and Graham is raising the bar for the exciting son of Bombora Downs Stud stallion Therock (Fastnet Rock). "He's such a big, strong and athletic horse that it was obvious that he only needed time to mature to fulfil his potential," said Graham. "We are looking at some pretty good races for him and will target the $100,000 Listed Hannans Handicap at Kalgoorlie in September and the $100,000 Listed Northam Cup in October." Both Graham and owner-breeder Brad Cooper are big fans of Tonkatuff's sire, Therock. "I really like the breed," Cooper said. "I have seen the stallion and he is one of the best looking stallions that you could ever wish to see. He is clearly stamping his progeny and they all seem to be big, strong and athletic types – just like him." From limited opportunities, Therock continues to produce winners around the country with Mercury Rocks winning impressively at the recent Bendigo meeting and Miss Harley Quinn winning in WA. Therock is again standing at Christoph Bruechert's Bombora Downs Stud on Victoria's Mornington Peninsula at a fee of $3,500 + gst. 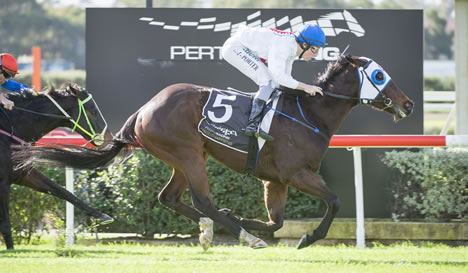