At Moonee Valley in Melbourne, Arrowfield Stud's incumbent Champion Australian Sire Snitzel (Redoute's Choice-Snippets' Lass, by Snippets) added a Group success when 4YO bay entire Russian Revolution (Snitzel-Ballet d'Amour, by Stravinsky) resumed with an impressive victory in the $200,000 Gr2 McEwen Stakes (1000m) for 3YO+, defeating Heatherly & Houtzen. Russian Revolution improved his record to 6 wins (including the Gr1 Galaxy, Gr2 Roman Consul Stakes & Gr3 Vain Stakes) from 9 starts for $982,225 in earnings. Russian Revolution races in the red and yellow star silks of the China Horse Club which purchased him for $320,000 at the 2015 Inglis Australian Easter Yearling Sale from the draft of Vinery Stud. Russian Revolution is a direct descendant of celebrated blue hen Fanfreluche, ancestress of former champion Australian sires Encosta de Lago and Flying Spur, and Coolmore stallion Holy Roman Emperor.Co-trainer Paul Snowden said Russian Revolution will have his next start in the Gr1 Moir Stakes (1000m) at Mooney Valley on 29 September and is hoping he can attract the support of a slot-holder for the inaugural $10 million The Everest (1200m) at Royal Randwick on 14 October. "We targeted this race on purpose because it was a barrier trial for the Moir Stakes in a couple of weeks' time so it was a good indication to see how he handled it," Snowden told racing.com. "The Moir will be a crucial lead-up to The Everest and it's probably going to be a lot stronger than what it's been in the last few years." 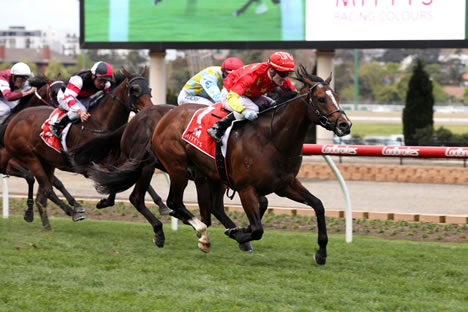