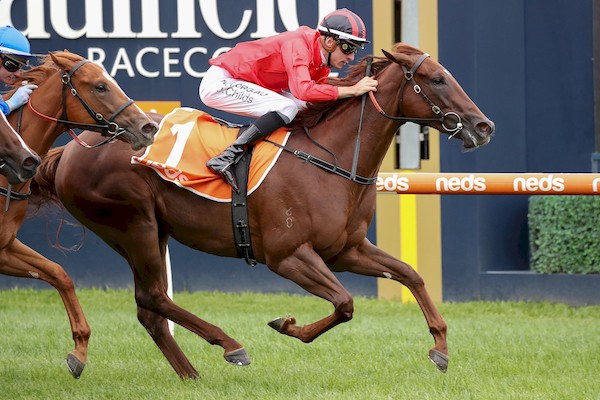 The Inglis Classic Yearling Sale’s reputation has soared in recent years and 2021 Gr3 Blue Diamond Preview winner Dosh is doing her bit to ensure that continues this autumn.

Dosh (Rich Enuff) proved herself a quality filly with a debut Group 3 victory at Flemington during Melbourne Cup Week and backed that up with a strong front-running victory in the Australia Day juvenile fillies feature to keep her unbeaten record intact.

Dosh (pictured) is proving to be one of the leading 2YOs of her generation, firming onto the third line of betting for this month’s Gr1 Blue Diamond Stakes at $11 with TAB following the Preview success.

Dosh’s trainer Grahame Begg purchased her for $155,000 at last year’s Classic Sale, where she was offered by Glenlogan Park Stud whose stud master Steve Morley clearly remembers when Begg first laid eyes on Dosh at Riverside almost 12 months ago.

“As soon as he saw her and paraded her Grahame said he was determined to take her home and that he wasn’t going to be beaten in the ring; he was that in love with her and I’ll tell you what, his judgement is being confirmed yet again,’’ Morley said.

“She was a standout from day one really. She was a beautiful big foal that developed into a really attractive weanling and by the time we got her to Riverside for the Classic Sale she was a big, strong, robust, athletic yearling with a lot of class about her.

“There were a lot of people at Riverside for those inspection days last year and there weren’t too many of those who didn’t take notice of this filly.’’

Dosh has already more than paid her way, with her latest victory taking her prizemoney to $225,000 and with the Blue Diamond, Golden Slipper and a lucrative career ahead, she appears to be well on her way to proving herself a standout of her crop.

Yearlings for the 2021 Classic Yearling Sale will be available for inspections at Riverside from Tuesday, 2 February.