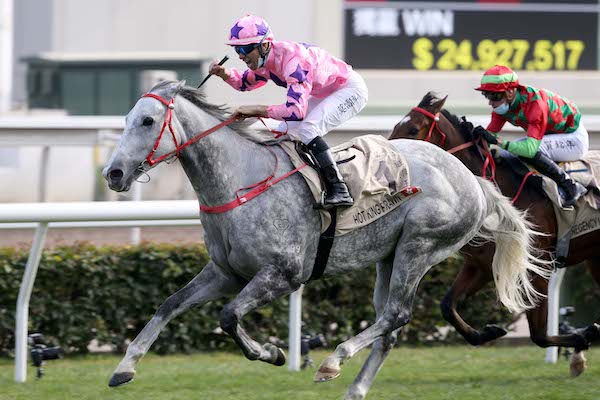 Good things come to those who wait and that was certainly the case for one of Hong Kong’s most popular racehorses Hot King Prawn (Denman x De Chorus), who claimed a deserved maiden Gr1 in the Centenary Sprint Cup at Sha Tin in late January.

The John Size trainee became the 10th Gr1-winning graduate since 2018 of the Inglis Classic Sale, eight of whom could have been bought for $100,000 or less, while also joining a fellow grey Classic graduate, Classique Legend, amongst the ranks of the best sprinters in the world.

Hot King Prawn was offered by Torryburn Stud at the 2016 Inglis Classic Yearling Sale, where he sold to Aquanita Racing for $90,000.

The G1 breakthrough is well-timed, with Torryburn set to offer the full brother at the 2021 Inglis Classic Sale which begins later this week.

“It’s so exciting for Torryburn, we remember Hot King Prawn well and have followed his career closely,” Brett Cornish of Torryburn Stud said. “He really did deserve this Gr1 as he’s come close a few times and this is despite being very sick with colic in February 2019 – which caused him to miss his 4YO season.

“It’s a credit to trainer John Size to get him back, Hot King Prawn is in the form of his career, he was purchased to go to Hong Kong and he’s now won five Stakes races.

“As a yearling he was very athletic, medium sized but a beautiful mover and I described him as a ballerina the way he could just turn on a dime, he was so light on his feet and very balanced.

“The yearling full brother is quite similar to ‘the Prawn’, very athletic, although maybe a little bigger, he’s really thrived during the prep” Cornish said.

Torryburn was responsible for the $380,000 Classic top lot in 2020 and counts the likes of Terravista, Dixie Blossoms, El Dorado Dreaming and Deploy amongst other recent star graduates.

“We’re offering 37 yearlings at this year’s Inglis Classic Sale, the draft is looking great and we’re taking a couple of standouts including the Hot King Prawn brother and a Russian Revolution colt out of Progressive,” Cornish said.

In another boost to the Classic catalogue, Hot King Prawn’s half-sister Storm Siren (Excites), has a colt from the first crop of Churchill to be offered as Lot 347 by Widden Stud.