An explosive son of Champion Sire Exceed And Excel, he scored a career-defining victory in the 2019 Coolmore Stud Stakes Gr.1 and is competitively priced for his first book at stud this year.

“Exceedance is an exciting addition to our line-up,” Vinery General Manager Peter Orton said. “He has enormous potential at stud.  Exceed And Excel is a terrific source of early speed and his female side has great depth. He is a beautiful looking horse and has that strong pedigree to back him up.”

The Team Hawkes trained colt demonstrated his natural talent as a 2yo with a spectacular last to first victory on debut over 1100m. The race commentator, Matt Jackson, portrayed the win in dramatic fashion as the race unfolded; “Exceedance is rocketing home, look at this, Exceedance! What a win on debut! He came from a minute back.”

He was just as impressive second-up when just failing to catch Splintex at Rosehill despite clocking amazing sectionals. “He’s one of the nicest young horses I’ve ever ridden,” Tommy Berry declared in defeat after he ran an awesome 32.21s for the final 600m, the fastest at Rosehill that day. “He kept quickening in the straight and could be anything!”

That blistering turn of foot was palpable when Exceedance returned as a 3yo for a devastating first-up victory over boom colt Bivouac in the San Domenico Stakes Gr.3 at Rosehill. He followed up with more brilliant splits when flashing home late for placings in the Run To The Rose Gr.2 and Golden Rose Gr.1.

The stage was then set for the Coolmore Stud Stakes Gr.1 in Melbourne. It’s a grand final for colts and has launched the stud careers of Zoustar, Merchant Navy, Brazen Beau, Star Witness and Northern Meteor in recent years.

Despite being checked at the start, Exceedance fulfilled his potential with a powerful finish to defeat Bivouac and Loving Gaby in the straight-six championship at Flemington. “We were banged up between two others out of the barriers,” winning jockey Dwayne Dunn explained. “But John Hawkes told me he would win it in the final 200m – not the first 400m.  I decided to get on the back of Bivouac and it worked out perfectly.

“All credit to the horse, he looked after me once things went wrong early. He travelled up nicely and I knew what was under the bonnet. He’s got a great attitude, can really accelerate and is from a high-class family.”

Exceedance is the first living foal out of NZ-bred mare Bonnie Mac (Thorn Park). She won a Proud Miss Stakes LR at Morphettville and is one of four black-type winners from Gold Class (Gold Brose).

“That was extra special in the Coolmore,” Orton added. “He’s a super horse and it’s been a great season for 3yo colts with Exceedance, Bivouac and Yes Yes Yes. We knew he had talent from the outset but what he achieved in just 9 starts was amazing. 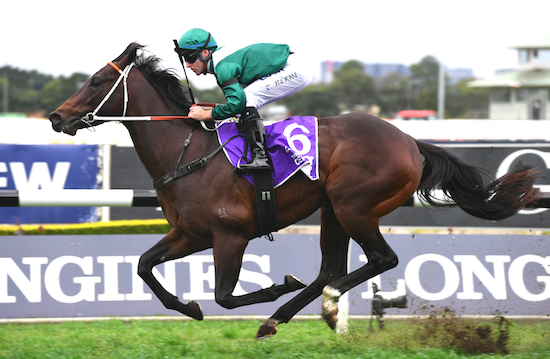