An impressive type who sold for $525,000 as a yearling, Sun City (Zoustar) was the most expensive Zoustar sold from his sire’s second crop. And as expected, he hit the ground running, being seen out in the first juvenile stakes race of the season where he ran second behind Unite and Conquer. Sun City showed his precocity, having two starts before Christmas, both in Listed company, then he broke his maiden in emphatic style in the Gr3 BJ McLachlan Stakes over 1200m at the end of the calendar year.

A joint infection ruled him out of the Magic Millions 2YO Classic and after a long layoff, Sun City attempted a return to the track as a 3YO. His trainer, Tony McEvoy, said, “He is a genuine Gr1 talent. Sadly injury prevented him from fulfilling that ability.” What was bad news for his racing owners, is good news for breeders, as they can access a good looking, precocious, fast son of a rising stallion for a reasonable fee.

Zoustar burst onto the stallion scene when his star filly Sunlight won the Magic Millions 2YO Classic, and she went on to be the Champion 3YO Filly in Australia. Recently retired, she won eleven races, five at two, and three Gr1 races including the Gr1 Coolmore Stud Stakes, a race also won by Zoustar himself. Sun City is from Zoustar’s second crop, and is one of thirteen stakes winners for the young stallion who is rising through the ranks of the top quality stallions in Australia.

Sun City is out of 2YO stakes winner Roulettes whose four foals to race are all winners, including stakes placed Star of Jupiter. This is a strong colonial family with many early developing types throughout the family, and the family has crossed well with the Danehill line. Not just through Roulettes, who is by Flying Spur, but also with South African stakes winner Sir Frenchie (Choisir), and Fastnet Rock sired trio of Albany Reunion, Fast Dragon, and Rock Robster.

An early developing speedster by a hot young sire from a precocious family, Sun City offers breeders a chance to find the next juvenile star. 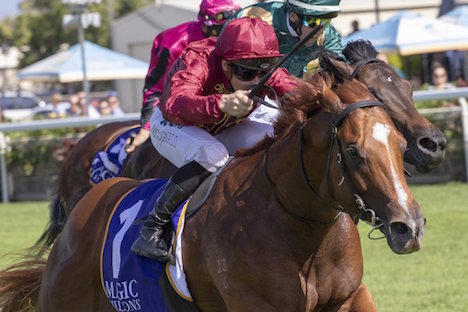